Check Out our Daily Cyber Week Deals!
SHOP NOW
FREE SHIPPING on any watch $99 and over !*
DETAILS
G-SHOCK Soho Presents
BB Bastidas
BB Bastidas (b. 1986) is a self-taught painter, multimedia artist, muralist, graphic designer and art director, whose work synthesizes the bold colors and dark undercurrents that span life on the fringes of modern America. His art is rooted in his Southern California hometown of Oceanside, where sunny seascapes often bely rough edges, and he draws on stints living in New York City and Europe to distill society with an eye that is both acerbic and decadent, inviting and alarming. Bastidas rose to prominence in the early 2000s as a skateboard deck designer, creating graphics for seminal Californian companies like Baker, Deathwish and Zero, and collaborating with clothing labels like Kr3w, Altamont and his recent line with Brixton. Lucid illustration and a counter-cultural streak have remained through lines as his work has moved from the streets of Southern California to the walls of galleries and museums. Using acrylic paint, oil paint, spray paint and watercolors, Bastidas’ figurative works contend with birth, death, the afterlife and the passage of time in a way that teeters on the surreal. Loaded with American iconography and thorny criticism, they’re as complex and enigmatic as the world they depict. Bastidas splits his time between Oceanside and New York City. His work has been exhibited in solo and group shows in New York, Tokyo, Paris, London, Los Angeles, Sydney, Tilburg, Bordeaux, and San Diego.

"I chose to design the DW5600 because this model is to G-Shock what 501s are to Levis: iconic, classic and unaffected by the whims that may come from the passing of time. My philosophy on time underpins the watch’s design and has always been the pillar of my artwork, which seeks to distill modern American society, from birth to death, to the afterlife and beyond. I dwelled on the meaning of time, the value of it, what we do with it, who we give it to, where it goes, when it ends. What does it mean to live in the present and Be Here Now? What does it mean when your time is up? A butterfly’s life span is just two weeks and a human’s is 100 years—but which is more valuable? What we do with our time is perhaps the most consequential judgement we’ll ever make." 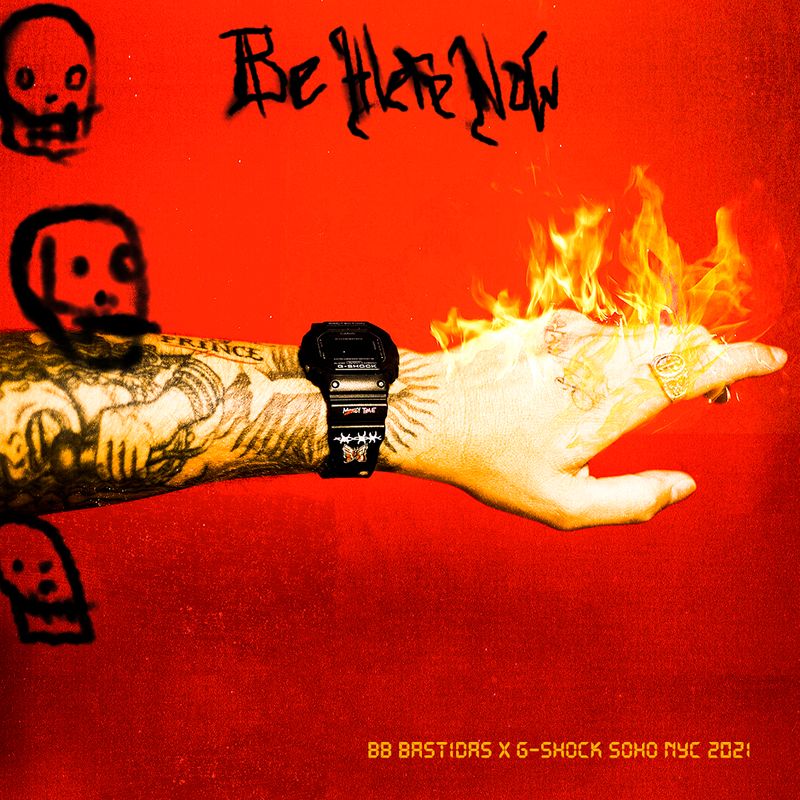